Cryolipolysis is a modern, effective and painless method of body sculpting by fat freezing. The state-of-the-art device CoolTech uses the method whose name is a combination of “cryo” – icy cold and “lipolysis” – a chemical breakdown of fat. Fat removal through freezing was discovered by dermatologists from Harvard Medical School who confirmed that subcutaneous fat cells are significantly more susceptible to cold than tissues that surround them. They proved that local cooling of tissues in controlled conditions allows to remove the subcutaneous fat without having a negative effect on the skin. Thanks to the state-of-the-art technology performed with the use of CoolTech, it is possible to shape the body without a scalpel. 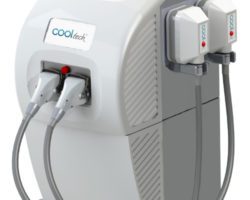 How does CoolTech work – fat freezing?

Adipose tissue reduction with the use of CoolTech consists in applying the so-called cryolipolysis. During a cryolipolysis treatment in Fabskin center in Warsaw, excess fat cells susceptible to low temperature are subject to a freezing procedure in such a way so as to cause their breakdown. During the adipose tissue reduction treatment, fat cells, which are rich in saturated fatty acids, are removed, whereas the surrounding nerves, blood vessels and fat cells containing fewer fatty cells are left unaffected. The gradually cooled down fat cells are removed from the body, which leads to reduction of the fat tissue that can be observed in patients. The device is equipped with a triple head which enables us to perform the procedure on a large body area or two areas at the same time. The treatments can be applied not only to persons with obesity, as the scope of temperatures allows to perform the procedure also in persons with small amount of adipose tissue.

The freezing procedure with the use of CoolTech in our Fabskin center in Warsaw can be divided into 3 stages:
– The first stage of the procedure is the so-called sucking stage. A special anti-frostbite mat is applied to a given body area. Next, a special gel is spread on the body which conducts cold. The next step during the non-invasive adipose tissue reduction is the use of a cooling head. The skin and the subcutaneous tissues are sucked up by the pressure, thanks to which the cold is applied directly to the adipose tissue. What is more, the applied pressure makes the procedure more effective and painless.

The second stage is the cooling stage. Adipose tissues are cooled down by metal elements located inside the head and generators of CoolTech, which quickly reduce the tissue temperature even down to -8 degrees. During the cryolipolysis treatment temperature is monitored the entire time, which leaves the other cells undamaged.

The last stage of fat freezing is the metabolism stage – fat cells that are damaged with low temperature are gradually removed from the body. Transitional inflammation appears in the treated area (up to 24 hours), which is necessary in the process of damaged cells disposals, usually lasting from 6 to 12 weeks. 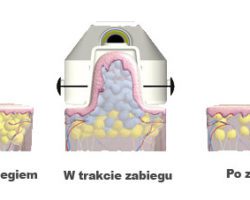 Who is the procedure without scalpel with the use of CoolTech machine for?

CoolTech adipose tissue removal is recommended mainly to persons who, despite diets and exercises, cannot lose the unwanted and unsightly fat from the most critical parts of their body. The treatment is intended for body slimming and shaping, removal of adipose tissue around the stomach and making the body more flexible. Patients usually visit our center, located in Bemowo in Warsaw, to permanently remove fat from the following body parts:
– love handles,
– belly,
– arms,
– inner part of thighs,
– hips and back. 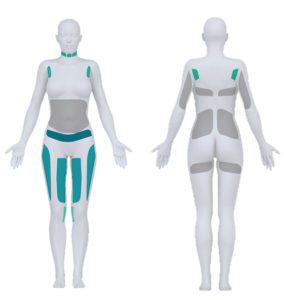 Every fat freezing treatment conducted at Fabskin is preceded by a consultation. During the meeting, our consultant will answer all your questions and dispel any doubts.

Preparation for the fat freezing treatment

– in order to help the body lose damaged fat cells, patients should continue drinking a lot of water,
– do not expose the body parts that were subject to cryolipolysis to sun for at least a month,
– it is not recommended to perform other fat reduction and weight loss treatments that affect the liver,
– once a month, a lymphatic drainage is recommended.

Contraindications to adipose tissue reduction with the use of Coolsculpting

The most common contraindications include:

– kidney failure,
– liver conditions,
– problems with veins,
– pregnancy and breastfeeding,
– advanced diabetes,
– cancer,
– skin problems,
– use of tanning beds or exposing the body to sunlight within 14 days before the procedure,
– cryoglobulinemia (tendency of damaging antibodies in low temperatures)

How many Cryolipolysis treatments should be performed?

Body shaping by fat freezing lasts around one hour, depending on the part of the body. The treatment should be performed not more often than every 4-6 weeks, on the same body area and after 2 weeks on a different body area. Our patients begin to see the difference after 2 – 4 months after the procedure, since excessive amount of fatty tissue is removed from the body in a natural way within two months. The treatment is non-invasive and does not increase cholesterol levels in any way. 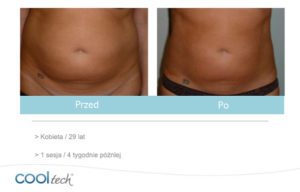 A selected area that is treated with cryolipolysis is covered with a special gel pad, which is supposed to additionally protect the skin. During the operation of CoolTech machine, excess adipose tissue is placed between two cooling panels. The sensations experienced by a patient include slight cold and delicate sucking of the skin, i.e. tensing. After some time, the body part that was subject to cryolipolysis becomes numb. After the procedure, some reddening may appear in the place where the head was applied to the skin as well as bruises, especially in the case of persons with tendency for blood vessel breaking. In persons with characteristic loose tissue and women who gave birth, local frostbites of the skin can occur, which are only temporary and disappear within 7 days. 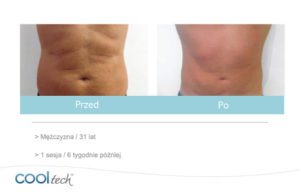 Effects of fat freezing with CoolTech

Studies have shown that adipose tissue reduction with the use of a cryolipolysis machine is very effective, non-invasive, and most of all brings lasting effects. Fat cells, that are present in human body are very sensitive to cold and they are destroyed already at the temperature of 0 degrees. The first effects become visible after around 4 days after the procedure, when the fatty tissue becomes loose. For the most visible and extraordinary effect of body shaping without scalpel we have to wait between one and a few months so that the body can remove all damaged fat cells. The most crucial information for our patients is the fact that the end result of the treatment is adipose tissue reduction by up to 25-45%, which involves a loss of even a few centimeters. What is important, however, is not to gain weight after the procedure, as it will prevent us from seeing the desired effects.oczekiwanych efektów. 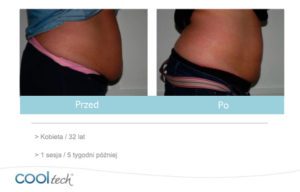 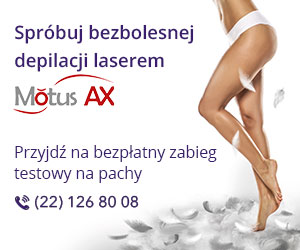